Free photos of Pelileo, Ecuador and Salasaca Ecuador - along the road between Baños and Ambato

Pelileo, Ecuador (San Pedro de Pelileo) is a city located at the center of the Andean region of Ecuador called La Sierra ("the highlands"). It is the capital of Pelileo County (48,988 inhabitants, 2001 Census), and forms part of Tungurahua Province.  Pelileo was founded by Antonio Clavijo in 1570. On August 5, 1949, Pelileo was totally destroyed by an earthquake. Some 5,000 people died within the limits of the county. The only remaining structure still visible from the old city is a broken stone pillar, once part of Pelileo's magnificent main chuch.
A new city was rebuilt in a nearby location. Currently it is therefore possible to visit both the Great Pelileo (Pelileo Grande), and the New Pelileo (Pelileo Nuevo). 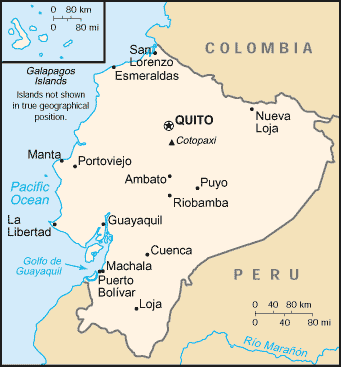 Pelileo is also known as the Blue City, because of its booming jean industry, mainly located in the El Tambo parish. Another of the parishes of Pelileo is the world famous Salasaca, home to a native American tribe originally from Bolivia that came to the Ecuadorian Andes as mitimaes. The Huambalo parish is well-known as the home of artisans of fine furniture. The main market days in Pelileo are Saturday and Tuesday.  On the morning of August 16, 2006, the Tungurahua volcano exploded, in what appears to be the main event of an eruptive process that started in 1999. On August 17, the whole of Pelileo woke up covered with rocks and ashes. In all the parishes of the county, crops were lost and farm animals were in danger.

Salasaca, Ecuador is located in the Tungurahua Province in the center of Ecuador, halfway along the road from Ambato to Baños. There are 12,000 people. Their language is Quechua. Their main economic activities are agriculture, livestock-raising and handcrafts. Local crafstmanship includes items such as tapestries, which are woven by hand on looms of very ancient technology. Many of the designs depict different aspects of their lives. There is a market in the central plaza of Salasaca called "Plaza of the Arts". The Quechua Salasacas perform traditional music using a flute and drum. Nowadays, the Quechua Salasacas have been incorporating other sounds that complement their traditional melodies. In June, Salasaca people celebrate the harvest festival called Inti Raymi that is celebrated in all Quechua communities of the Highlands (Sierra). However, in the Salasaca festival circuit, the Varayuk or Mayor, who carries a wand, which represents power and authority within the community, is the main personality.

(Text and map of Ecuador adapted from: Pelileo, Ecuador and Salasaca, Ecuador (2008). From Wikipedia, The Free Encyclopedia)

Free pictures of Pelileo, Ecuador and Salasaca Ecuador - along the road between Baños and Ambato.

Photos of Baños and Ambato and adjoining areas are separate.