Fernandina Island is the third largest, and youngest, island of the Galápagos Islands. The island is an active shield volcano that last erupted on Friday, May 13, 2005. The island was formed by the Galápagos hotspot. The southern flank of the volcano had a fissure eruption that generated flows, which subsided within hours. This is the youngest and westernmost island of the archipelago. It was named in honor of King Fernando of Spain, who sponsored the voyage of Christopher Columbus. 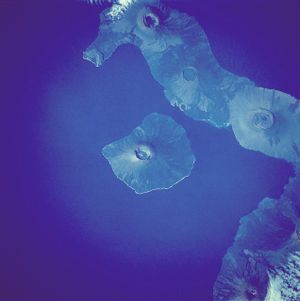 On the 14th of February 1825, while anchored in Banks Bay, Captain Benjamin Morrell recorded one of the largest eruptions in Galapagos history at Fernandina Volcano. His ship escaped to safety and his account the event was preserved.

Fernandina has an area of 642 km² and a height of 1,476 meters (4,842 feet), with a summit caldera about 6.5 kms wide. The caldera underwent a collapse in 1968, when parts of the caldera floor dropped 350 meters. A small lake has intermittently occupied the northern caldera floor, most recently in 1988.

Due to its recent volcanic activity, the island does not present much plant life and it has a rather gray ambiance. Visitors to Fernandina Island will be taken to see only the outside skirts of this crater for safety reasons. Punta Espinoza is a narrow stretch of land where hundreds of marine iguanas gather in large groups on black lava rocks. The famous Flightless Cormorant inhabits this island as well as penguins, pelicans and sea lions. Mangrove forests also abound on the island.

The Galápagos Islands (Official name: Archipiélago de Colón; other Spanish names: Islas de Colónumio or Islas Galápagos, from galápago, "saddle"—after the shells of saddlebacked Galápagos tortoises) are an archipelago of volcanic islands distributed around the equator, 965 kilometres (about 600 miles) west of continental Ecuador in the Pacific Ocean. The group consists of 13 main islands, 6 smaller islands, and 107 rocks and islets. The islands are located at a geological hot spot, a place where the earth's crust is being melted from below by a mantle plume, creating volcanos. The oldest island is thought to have formed between 5 and 10 million years ago. The youngest islands, Isabela and Fernandina, are still being formed, with the most recent volcanic eruption in 2005. It is one of the few places in the world without an indigenous population. The Galápagos archipelago is a province of Ecuador, a country in northwestern South America, and the islands are all part of Ecuador's national park system. They are famed for their vast number of endemic species and the studies by Charles Darwin during the voyage of the Beagle that contributed to the inception of Darwin's theory of evolution by natural selection.

See all the free photos, including other photos of Ecuador and Galapagos Islands in the Photo Catalog.    Click on any picture for a FREE larger version. Read the licensing rules (REVISED) for your needs. There are hundreds of high quality free photos: use the Google/site search engine. See our digital photography tips : DOs and Don'ts;  Choosing a Camera and Accessories , Downloading Photos, and Editing Photos. Visit TechnologySite.org for free photos and lists of inventions and technology and learn Climate Change Facts to see for yourself if your area is at risk from global warming or global cooling.